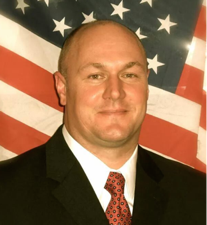 Thomas Foley was elected to Council in 2012 and sworn in as Mayor in July 2014. As a third generation resident of Keansburg, Thomas has dedicated many years to the Borough, four of them as a Keansburg Police Patrolman and three as a coach for the Borough’s Little League Baseball team. Prior to his work as a patrolman, Thomas worked for the International Longshoremen’s Association (ILA Local 1).

Thomas presently serves on the Keansburg Planning Board as well as Housing Authority. He also is a member of the Holmdel Police Department.

He graduated with a BA in Criminal Justice from Monmouth University and an MA in Human Resource Management from Seton Hall.

A lifelong resident of Keansburg, Thomas lives here with his wife of 13 years, Treacy Anberg Foley. He raised his two children here, 9-year-old Michael and 7-year-old Thomas, and both are enrolled in the Keansburg school system.